What he learned from building four companies in one year 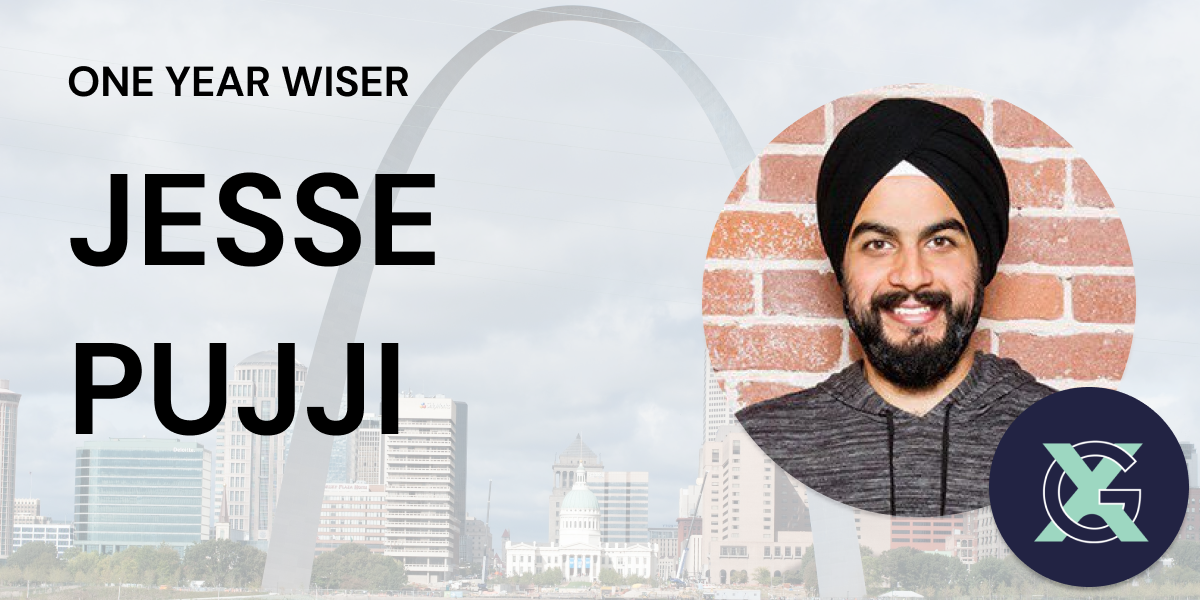 Prior to Gateway X, Jesse founded Ampush, a growth marketing firm that helped a number of well known tech unicorns grow over the past decade. That experience and expertise has come in handy in his new venture, which he started in January 2021. Since starting Gateway X, he has launched four companies.

I reached out to Jesse because I was interested to hear what he’s learned from building and iterating on four products in the past year.

In our conversation, Jesse talks about:

My questions are in bold; this interview has been lightly edited for clarity.

Let’s start at the beginning. Can you give me a quick overview of how the idea for Gateway X came about?

Jesse Pujji: I started a company 12 years ago called Ampush. We were one of the first companies to crack the code on Facebook marketing and build a tech enabled solution. So we had software built on the Facebook API and then offered services to some big fast growing startups, like Uber, Peloton, and Dollar Shave Club. We scaled it and had a partial exit.

Over the last few years, I had gotten to the point where I had had success, and I spent time thinking about what do I want? What do I want more than success or money? What do I truly enjoy doing? I worked with a coach to answer these questions and the learning that came from that experience was that I really love the entrepreneurial building process. I really love coaching and teaching others. I love building relationships.

So starting with those three things, I asked myself, what would a business look like that let me do those three things all the time? The more I iterated on it I arrived at the venture studio model where you come up with ideas and then hire a team to build and run it out. And in my case, they are ideas where I have some unfair advantage. For me that is either selling to brands and customers I know, or building things that use customer acquisition, which is something I know really well.

The strategy is that we mostly build or invest in companies aligned with my unfair advantage. It’s been a lot of fun and we are learning a ton. We launched four companies in the last year.

And the name was inspired by St. Louis. I recently moved here and it’s known as the gateway city.

That’s really interesting. I’d imagine that many people in your situation would have either gone just the investment route or start another company. Sounds like you’ve found the perfect mix.

JP: Yeah, I went through a bunch of iterations and in some sense, I am still going through them. But I definitely want to be more hands on than a typical investor, but maybe not as focused on one idea as an entrepreneur. I don’t know if this is going to work. I’m getting myself comfortable with that in a few years, I might say, ‘I tried this thing and it didn't get there. You really do have to stay focused on only one idea.’ I think there are lots to like about this model, but there's also a lot of things that aren't natural per say.

Can you tell me more about why you are focused on DTC companies? Is it based on your experience at Ampush?

JP: There's two pieces to it. The practical piece is that I know it really well.

Also, when it comes to e-commerce, I truly think we're in the second or third inning of how it is playing out. From my perspective, Shopify will be a trillion dollar company. I looked at what has a bigger growth factor, in terms of total nominal size not necessarily as a percentage rate than e-commerce and I couldn't find too many things bigger.‍

So you are doing some investing and also starting companies to build out a portfolio for Gateway X. Four in one year is impressive. ‍

When it comes to starting these companies, do you have a very clear playbook that is repeatable, or does it depend on the idea?

JP: We're writing the playbook right now. I definitely have one in my head, but it's not perfectly laid out. Essentially it’s:

One of the things we're trying to accomplish at Gateway X, which may or may not work, is that we’re trying to bootstrap all of these businesses. No outside investors. We put money in at the beginning, but our goal is to get them to profitability within six months.

We're purposely trying to pick businesses and ideas that fit that bill. Our dream is to have 10 companies, each doing $10 million in profit, as opposed to having one multibillion dollar unicorn that is venture funded and that we had to burn a lot of cash to build. Not that I think there's anything wrong or right about the two approaches, it’s just what I prefer.‍

Across the four companies that you’ve built, have you noticed any commonalities when it comes to having to adjust your strategy as you learn more about the business?

JP: Some of it's learning things viscerally through experience versus talking about them. The customer problem matters a lot, obviously. The solution matters. And then getting the business model right vis a vis how much cash it uses and how much will customer acquisition cost.

As I mentioned, my unfair advantage is that last part. I have a lot of knowledge and experience in running ads on Facebook and other places, but even when you're the best in the world at it, you still have to spend money on customer acquisition.

Whereas, in the case of Growth Assistant, we’ve been able to leverage my network and Twitter so we’ve had to spend very little.

But going back to your question, I think the most important thing is the customer problem. Then making sure the team is structured with the right people to solve that problem. Also, solving it quickly. Speed is super important. ‍

You’ve mentioned your unfair advantage a few times and the importance of leveraging it when you are starting a company. How did you come up with that philosophy or was it more of something that you saw naturally happening when you reflected back at the companies you’ve started?

JP: I think it naturally shows up in the calculus, as I evaluate ideas and opportunities. Part of what's inherent to building a business to me is being opportunistic, for better or worse. If you think about the classic prioritization framework of I.C.E. - impact, confidence, ease - I’m naturally running everything through that and incorporating my unfair advantage into that framework. For Growth Assistant, I realized that I can call 20 of my former employees and they'd be the first customers.‍

Switching gears a bit, what's been the most challenging part of the past year?

As the CEO of Ampush, I was switching from product development for the next feature we’re shipping for Facebook’s API to a sales meeting to figure out how we improve our close rate of clients.

Now, I’m experiencing a whole new level of context switching. One minute, I’m focused on telling the story of why 50 year old women should buy probiotics and next I’m trying to figure out how to help brand X scale to a team of 10 in the Philippines or something like that. I’m really jumping through completely different contexts.

I would say that I do enjoy it. But it’s about finding the right timing and stage for these things. I can see a way that this can work well, but I don’t think I’m there yet.‍

What's been your approach or technique to make things better and get to that better state?

JP: Well on a week to week basis I spend a fair bit of time on Sunday afternoons and probably every couple of days triaging my own priority list. Identifying what's most important and what needs to get done. When I’m working with the teams, I am on a constant lookout for what's the most important thing that I can add the most value to across each of these projects. I can't necessarily own them fully, which is why it’s so important that we have great leadership teams.‍

I want to touch on picking the right success metric. How do you approach it?

JP: All companies have an interconnected set of things you want to pay attention to. The output side is obviously revenue and profit, and maybe cash. But the decisions you make primarily affect the inputs.

There's this really great Paul Graham essay about just creating continuous growth in an early stage startup. It can be any number, but it needs to grow every week. This forces you to triage problems faster. I love that it can be this guiding light. So I make sure we find a heuristic that we can just look at every week, every month and see that it's going up and growing. That's super important.

Interesting and it sounds like you are less concerned if your hypothesis turns out wrong and more concerned that you are proving or disproving them quickly.

JP: I mean, of course, you want to be proving the right stuff. Otherwise you're spinning yourself in circles forever. But assuming you have the right set of waypoints, such as will people buy this at X conversion rate, you don’t want to wait too long to validate it. Don’t wait a month, go super fast and figure it out.‍

Got it, that makes sense. So new for 2022, I'm going to try out a quick fire round at the end. Short, less than a minute answers.

What do you know now that you wish you'd known a year ago?

JP: I think customer development stuff. It’s not an area I had spent a ton of time in. I’ve always done B2B sales so I’ve always felt comfortable just talking to people. But on the B2C front, I’ve never actually been on the front lines of talking to customers, doing user research, and it’s something that I wish I knew more about.‍

What book do you recommend the most and why?

JP: 15 Commitments of Conscious Leadership by Jim Dethmer, Diana Chapman, and Kaley Klemp. It’s a paradigm that I've used with my coach a lot and I’ve found a ton of value in. At the heart of it, is having self awareness around where you're coming from at any given moment? Are you coming from fear or are you coming from a sense of play? And the importance of noticing that and knowing when to shift.‍

What are you most proud of from the past year?

JP: It relates to the context switching I mentioned earlier, but I’m proud of getting so many things up and running. Truly getting to that entrepreneurial system where you can get that many things running.‍

Last question for you, what advice do you have for someone that's thinking of starting a DTC company in 2022?

JP: The best advice is probably just start. Get a website up and start trying to sell something. It probably won’t work and you’ll make a lot of mistakes, but it'll get you in the game. Once you’re in the game you’ll learn things and see the real opportunities.

You could spend six months or two years thinking of ideas and concepts or whatever, but you won't get anywhere. But if you spend three months trying to launch, even a totally shitty, commoditized product, you'll learn way more in that process.

--------
I hope you enjoyed my interview with Jesse and learned a few things. If you did, give it some love on Twitter with a RT or Like. This helps more people discover my newsletter 😊  -Tyler

Thank you! Your submission has been received!
Oops! Something went wrong while submitting the form.
100% Free • UNSUBSCRIBE ANYTIME