Rethinking language learning, beyond the game-like apps you always tell yourself you’ll use and never do 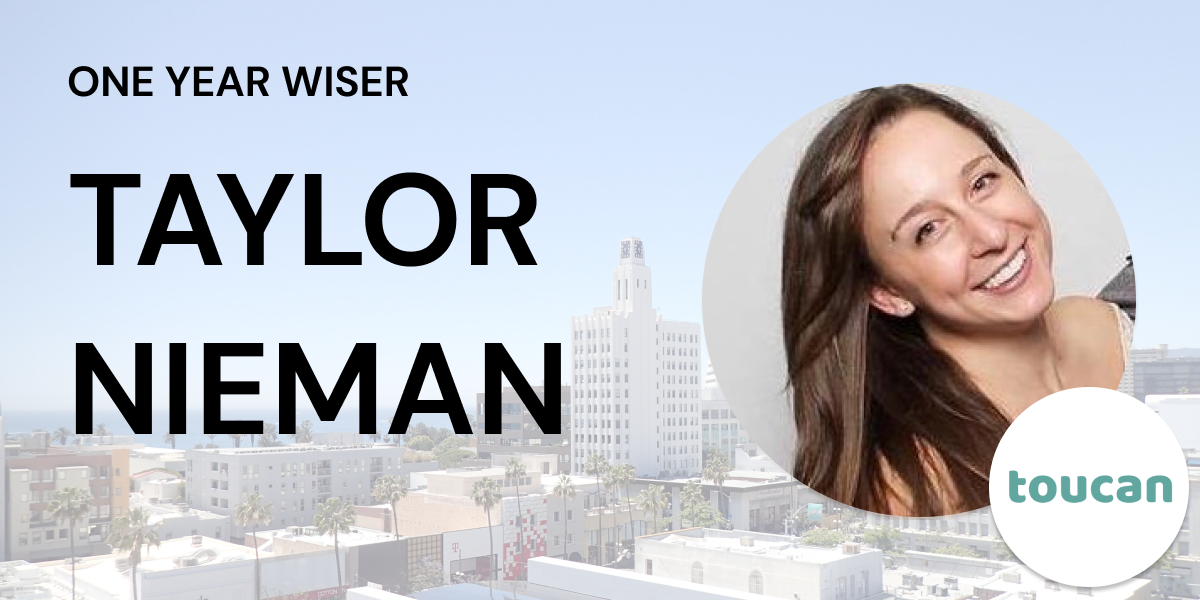 I reached out to Taylor Nieman because I loved the unique approach that Toucan takes to help people learn a new language. I’ve always aspired to learn a second language and have had multiple starts and stops with the game-like approach that Duolingo and Babbel take but to no avail.

Taylor is passionate about learning new languages but always found it hard to make time for it as well. She and her co-founders, Brandon Dietz and Shaun Merritt, realized there had to be a better way than the apps that have become popular in the last five years.

In her words: “We know how hard it is to make time for that experience even with a cool app or user-friendly tool. So we created Toucan with the core goal of helping people learn a new language while meeting them where they are.”

‍Learning a new language is something millions of people aspire to do, but many people don’t stick with it long enough to have a basic understanding of the language, let alone become fluent. The standard way of learning via a game-like app doesn’t work for the majority of people. This resonates with me personally as I've started and stopped Duolingo for French countless times. Duolingo is the largest language-learning company in the world. They have over 500 million registered users, but of the people that have tried their product, only 8% (42 million) have stuck with it and opened their app in the past month. And that’s being generous because you need to practice language daily if you want to become fluent and it's highly likely that their daily active users are much much lower. Note: Duolingo does not publicly report their DAU.

In contrast to the approach where you need to open the app daily (via one of their trillion push reminders), Toucan is a browser plugin that changes a select portion of each webpage to the language you are trying to learn. You start with only a few words in the new language and as you learn more then more and more of the web pages you visit are in the new language. It gives you a semi-immersive way to absorb a new language. As Taylor told me: “Toucan has an insanely high daily usage rate. In fact, users spend over four hours a day on Toucan.”‍

Toucan launched a year ago on Product Hunt, in September 2020, and it was very well received. They were the #1 product on the day. Their website is interactive and clearly demonstrates the value prop.

In our conversation, we cover:

Paired with their product launch in September 2020, they announced $3 million in seed funding led by GSV Ventures. Six months later, in April 2021, they announced they had raised an additional $4.5 million, bringing their total fundraising to $7 million. The recent round was led by LightShed Ventures.

Their approach to developing a product followed the typical route of developing a small minimum viable product (“MVP”) for friends and family to test out. However, after the Product Hunt launch they did more than is typical to collect user feedback. Many startups might send out a survey or two, or add a feedback dialog box to their website. Taylor went above and beyond to ensure that they had an open feedback loop with customers. In our conversation, she told me: “After the official launch, I sent personalized emails to every single one of our users to welcome them and ask for their feedback. It’s actually something we still do to this day.”‍

I’m impressed that they still do this today even though they have 100s of thousands of users.

This customer-centric approach made it easier for them to stay focused on building and improving their product after launch day instead of getting distracted by the influx of signups and the inevitable trail off that follows any big launch. Instead of measuring the success of their Product Hunt launch by the number of signups, Taylor gauged their progress based on the sentiment of user feedback.

Taylor: “Back then, our success metrics were primarily focused on user feedback and how much they were enjoying the product. We’re fortunate to have built a product that truly solves a problem for our users. People want to learn another language, but they don’t have time. Toucan addresses that problem. So it’s been relatively easy to stay motivated thanks to the reception from users and stakeholders. There’s so much we can do with Toucan and with every new update we ship out, it feels like a new launch.”‍

Now as their product has matured they’ve shifted their focus to growth and retention. This strategy of staying focused on customer feedback and ensuring that your product solves a real problem for some real people before focusing on scale and reach is something that I’ve heard from multiple successful product leaders.

Taylor: “These days though, with a focus on growth and retention, we recently hit our goal of 150,000 users and we’re hard at work to add another ‘0’ to the end of that number while maintaining an awesome user experience.”‍

Roughly 10 months after their launch, they released a 2.0 version in July with an updated algorithm, more languages, and Safari support. They’d follow that up with Mozilla support a month later. I asked Taylor how their product strategy evolved over the past year and whether there was anything they spent a lot of time on pre-launch that has turned out not to matter as much.

Taylor: “Toucan is aggressively user-centric and, based on user feedback, we’ve doubled down on improving our ability to translate more and more languages in contextually accurate ways. It sounds simple on its surface, but languages are incredibly complex, so what we’re doing is actually quite ground-breaking. Of course, like all start-ups and even more mature companies, we’ve launched features that weren’t as well-received as we expected. However, we learned a lot from those moments and, with the most recent version of Toucan, we’re delivering users what they want. More languages, more browsers, and more opportunities to learn a new language.”‍

Toucan has two ways of earning revenue. The primary way that they earn revenue is from the premium version they offer for $4.99 per month. This premium version offers users a higher density of translations on a page and the removal of ads. But what I really like about Toucan, is that they took traditional digital advertising and gave it a twist, introducing an ad format they call “Own The Word.”

“Own The Word” is an ad format that allows people to claim a word for $4.99 per week and display their name and a link to an external site whenever one of Toucan’s 150,000 users has that word translated on the page they are viewing. For example, Postmates could claim the word “hungry” and anytime someone is looking at the translation (affamé) they’d be reminded of Postmates with a link to the app. This is a great ad format and I’m very interested to see the clever ways that people advertise with it. As their website says “Words spark memories, create inside jokes, and share secrets. ‘Own the Word’ is a way to claim a little bit of the language that moves us every day.” Here’s one that I came across recently, the word “computer” is owned by Sam Rogers and it links to his ebay store where he sells computer parts:

Because Toucan is an add on to your daily web browsing it always stays top of mind for you and gives you value on a daily basis. This daily habit helps justify the $4.99 upgrade and makes it a straightforward upsell for Toucan. As Taylor told me, on top of the already strong daily usage, “with the premium version, users get even more of what they love; a higher frequency of translations, more quizzes/mini-games, and more control.”‍

I asked Taylor about their approach to customer acquisition. With only 150k users compared to Duolingo’s 500M registered users they have a lot of room to grow :). They’ve focused on partnerships and good old fashioned word of mouth to grow their user base.

Taylor: “We collaborate with partners in language-learning communities, from social media influencers to teachers. However, nothing beats word of mouth. Because of how much emphasis we put on being user-centric, our users love to tell people about Toucan. So most of our new users install Toucan after hearing about it from their friends and family.”‍

Lastly, I asked Taylor where she expects Toucan to be a year from now.

Taylor: “Right now, we want to make Toucan the premier augmented language-learning experience. That means not just helping people learn a new language while they browse the web, but also during other activities people engage in throughout their day. So we’re looking to expand into other platforms like mobile, audio, voice, AR, VR, and beyond.”‍

It will be interesting to see how they evolve their product for other platforms, especially mobile since mobile platforms haven’t historically supported browser extension. It’s hard for me to see Apple allowing them. Only recently have select Android browsers begun supporting extensions.

I’m excited to see what the next year has in store for them as they expand their offering.

I hope you enjoyed my interview with Taylor and learned a few things. If you did, give it some love on Twitter with a RT or Like. This helps more people discover my newsletter 😊  -Tyler

Thank you! Your submission has been received!
Oops! Something went wrong while submitting the form.
100% Free • UNSUBSCRIBE ANYTIME